Securing Applications in the Cloud 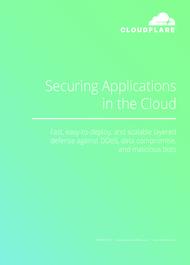 Companies are facing increased pressures to strengthen their security posture. Three forces contributing
to the pressure are:

Attackers are increasing their frequency and volume of Distributed Denial-of-Service (DDoS) attacks. By leveraging botnets and the millions of Internet-of-Things (IoT) devices online, they are able to wage highly distributed volumetric attacks with greater ease and impact.

In addition to sending higher volumes, attackers are shifting their focus from the network layer to the application layer. Application-layer or “Layer 7” attacks are harder to detect, often require fewer resources to bring down a website or application, and disrupt operations.

Attackers are able to monetize their attempts to bring down sites or steal sensitive data, for example, by holding sites for ransom. As a result, because of the successful ransom payouts by their enterprise targets, the attackers are more motivated, organized and pervasive.

With increased exposure, companies need to strengthen their defense against three primary problems and risks.

IoT in the Enterprise
View