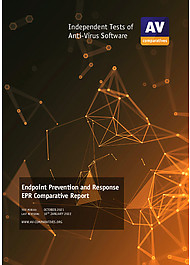 This report includes the results of the tests, showing at which stage (if any) each product provided active or passive response to each threat. However, a number of other factors are also considered. Firstly, the time to respond is noted. Clearly, the sooner an attack is stopped or detected, the better. The tested products were given a window of 24 hours after the start of each attack in which to take action. The ability of each product to take remedial action, such as isolating an endpoint from the network, restoring it from a system image, or editing the Windows Registry, was noted. Likewise, each product’s ability to investigate the nature of an attack, including a timeline and breakdown of phases, was investigated. Also considered was the ability of each product to collect and present information on indicators of compromise in an easily accessible form.