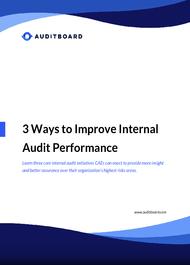 If the past four years have proven anything, it may be that new technologies have had a serious, profound, and everlasting impact on corporate business. Drones, the Internet of Things, and “Big Data” from companies like Amazon, NVIDIA, and IBM have become commonplace in the workplace.

New technologies are also changing how business is carried out. For example, many Chief Information Officers are now spending significant time addressing requests to embed Software as a service (SaaS) and robotics process automation (RPA) technologies in their programs in order to streamline enterprise processes. Additionally, Chief Marketing Officers are leveraging artificial intelligence to send the right message, to the right customer, at the right time.

Of the 1,200 Chief Audit Executives (CAEs) Deloitte surveyed in 2016, 85% expected that their organizations will significantly change in the next 3 to 5 years. Most CAEs were also aware thattheir Audit Committees and management teams expect internal audit to adapt to meet these changes.

Unfortunately, audit plans haven’t adapted to address these changes. The MIS Training Institute surveyed 400 auditors on audit plan topics for 2017 and found the top six cited audit projects included Cybersecurity, controls over financial reporting, and compliance topics - which have been the most commonly-discussed topics in internal audit thought leadership for over a decade and a half.

Although these topics are important, focusing on the norm does not appear to be winning over our stakeholders. According to PwC’s 2017 State of the Internal Audit Industry survey, only 44% of the 800 CEOs, CFOs, and Audit Committee chairs reported they believe their internal audit department contributes significant value to the organization.

AI Benchmarks: A Barometer Before You Build
View