The Need for a New IT Security Architecture: Global Study on Compliance Challenges & Security Effectiveness in the Workplace 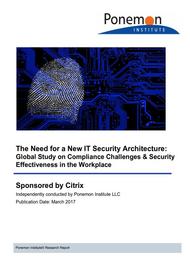 The Need for a New IT Security Architecture: Global Study, which was sponsored by Citrix and
conducted by Ponemon Institute, reveals global trends in IT security risks and reasons why
security practices and policies need to evolve in order to deal with threats from disruptive
technologies, cyber crime and compliance. Changes in the workplace and problems managing IT
security are also posing increased risk to the organization.

We surveyed 4,268 IT and IT security practitioners in Australia/New Zealand, Brazil, Canada,
China, Germany, France, India, Japan, Korea, Mexico, the Netherlands, the United Arab
Emirates, the United Kingdom and the United States. The consolidated findings are presented in
this report.

This is the third of three reports that present the findings of this global study. In this report, we
discuss the findings that concern risks created by compliance with regulations, especially
compliance with the EU’s General Data Protection Regulations (GDPR). According to the
research, 74 percent of respondents say that complying with the GDPR will have a significant and
negative impact on their organizations, such as large potential fines and the increased territorial
reach of the regulations. The study also addresses the influx of unapproved applications and
devices as well as organizational dysfunction created by differences among generations in the
workplace.