The 7 Tenets of Successful Identity Governance 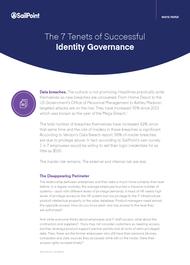 Data breaches. The outlook is not promising. Headlines practically write themselves as new breaches are uncovered. From Home Depot to the US Government’s Office of Personnel Management to Ashley Madison, targeted attacks are on the rise. They have increased 91% since 2013 which was known as the year of the Mega Breach.

The total number of breaches themselves have increased 62% since that same time and the role of insiders in these breaches is significant. According to Verizon’s Data Breach report, 88% of insider breaches are due to privilege abuse. In fact, according to SailPoint’s own survey, 1 in 7 employees would be willing to sell their login credentials for as little as $150.

The insider risk remains. The external and internal risk are real.

Do You Need A Better Defense Strategy?