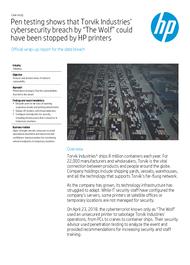 Torvik Industries* ships 8 million containers each year. For 22,000 manufacturers and wholesalers, Torvik is the vital connection between products and people around the globe. Company holdings include shipping yards, vessels, warehouses, and all the technology that supports Torvik’s far-flung network.

As the company has grown, its technology infrastructure has struggled to adapt. While IT security staff have configured the company’s servers, some printers at satellite offices or temporary locations are not managed for security.

On April 23, 2018, the cyberterrorist known only as “The Wolf” used an unsecured printer to sabotage Torvik Industries’ operations, from PCs to cranes to container ships. Their security advisor used penetration testing to analyze the event and provided recommendations for increasing security and staff training.

Torvik Industries is still reeling from the impacts of the cybersecurity breach on operations, as well as heightened publicity of their president’s unconventional views and criminal acts. While the organization seeks to develop a new direction in leadership, the direction for cybersecurity is clear: turning to HP printers and solutions will help foil the next Wolf that comes hunting.

Read the official wrap – up for the data breach.

*Torvik Industries is a fictional company targeted in a large cyberattack in HP Studio’s film, “THE WOLF: TRUE ALPHA.”

Is Your Company In Peril If Critical Data Is Breached?
View