HACKER-POWERED PEN TESTS AND THE POWER OF MORE 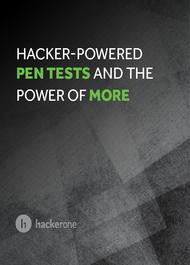 Your Attack Surfaces Are Multifaceted. Your Security Should Be Too.

Traditional penetration testing is a common strategy for application security. But you’re probably not always satisfied with the results. Standard pentests are often conducted by recently trained employees who deliver a report outlining lower severity vulnerabilities. Boutique firms promise more experience, but at an even higher cost.

With modern hacker-powered pen tests, you tap into more of the best talent, without a huge initial price tag. The hacker-powered model has been proven to deliver immense value, with customers reporting 6x returns.

Like traditional penetration testing, a hacker-powered pen test like the HackerOne Challenge program runs for a fixed time period. But it also brings to bear the skills of up to thousands of independent, trusted security researchers, ethical hackers who probe your web applications for vulnerabilities. These creative, talented hackers have more diverse skillsets than a comparable junior pen tester. They also find many more severe vulnerabilities than traditional pen testers, in part because they are paid not for their time, but for results.