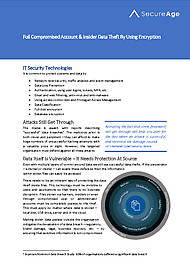 It is common to protect systems and data by:

The media is awash with reports describing “successful” data breaches. The malicious actor is both clever and persistent – they can afford to make huge numbers of unsuccessful hacking attempts with a valuable prize in sight. However, the targeted organisation must defend against all these attacks.