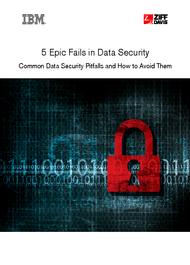 Data security is on everyone’s mind these days, and for good reason. Although the number of data breaches in the first half of 2017 was about the same as the first halves of 2015 and 2016, the number of records stolen between January 1 and June 30, 2017 has exceeded all of 2016. And that’s not counting one of largest security breaches of all time, announced in September.

This paper looks at five of the most prevalent – and avoidable – data security missteps organizations are making today, and how these “epic fails” open them up to potentially
disastrous attacks.

When Tech is Not Enough: Bringing Tools & Resources Together for Better Security Compliance
View