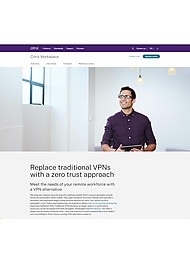 Not long ago, network security was still relatively simple: Build a secure perimeter around resources and protect what’s inside. Then apps moved to the cloud, remote work became a necessity and employees began using personal devices for work. Your attack surface expanded—a lot. Today most enterprises are looking to adopt a zero trust security strategy by replacing traditional VPN. Traditional VPN solutions no longer apply in a world where resources can be accessed from both managed, unmanaged and BYO devices. You need a better way to protect corporate data—one that matches current complexities of the modern work environment. That’s where a strong VPN alternative comes in.

Preparing for Uncertain Times: IT Considerations for Remote Workers
View

An SD-WAN that keeps you safe