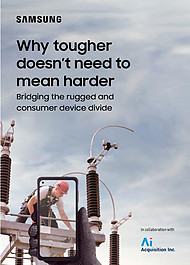 Rugged devices have been a business staple in many industries for decades, allowing frontline workers to operate even in the harshest of conditions. They’ve developed a reputation of being specific tools for specific needs, with durability and security coming at the expense of limited functionality, bulky design – and often an eye-watering price tag.

Meanwhile, some businesses have relied on consumer devices, choosing their superior performance, vaster range of features and faster evolution, at the expense of regular damage and failure.

But why does there need to be this divide between rugged and consumer devices? Why can’t there just be a better choice for businesses?

In this paper, we’ll look at how a new generation of rugged devices are merging the functionality, power and price you’ve come to expect from consumer devices with the durability and security you need from rugged handsets. You’ll see how this combination is more than just the sum of its parts—it’s ushering in a frontline revolution as workers become empowered to achieve more than ever before.