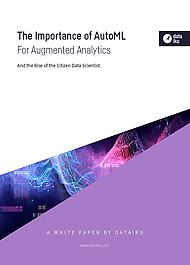 Since the 1960s, machines have been replacing humans by way of automation. Yet it’s only in the last few years – with the rise of artificial intelligence (AI), specifically in the enterprise – that automation became a word more synonymous with fear and loss than with development and progress.

It’s impossible to deny that when it comes to automation in the enterprise, whether it’s inventory management, cyber security vulnerability detection, or any one of the growing examples of business process automation, that technology can save people from the often boring parts of their jobs.

In fact, various studies from across industries over the years have shown that not only are humans notoriously bad at repetitive work (they fatigue and make mistakes), but they also (importantly) don’t find it fulfilling.

This white paper will take a deep-dive into an important and burgeoning area of enterprise automation across industries, which is automated machine learning (also known as MetaML or, more commonly, AutoML). Specifically, it will explore how AutoML has developed, the larger part it plays in augmented analytics, and what role it will have in the rise of Enterprise AI and the elusive citizen data scientist.

The Importance of AutoML For Augmented Analytics
View

How to Improve Data Quality with an Efficient Data Labeling Process