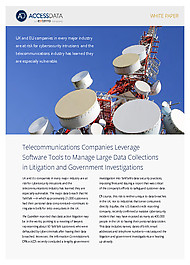 UK and EU companies in every major industry are at risk for cybersecurity intrusions and the telecommunications industry has learned they are especially vulnerable. The major data breach that hit TalkTalk —in which approximately 21,000 customers had their personal data compromised—continues to ring alarm bells for telco executives in the UK.

The Guardian reported that class action litigation may be in the works, pointing to a meeting of lawyers representing about 50 TalkTalk customers who were defrauded by cybercriminals after having their data breached. Moreover, the Information Commissioner’s Office (ICO) recently concluded a lengthy government investigation into TalkTalk’s data security practices, imposing fines and issuing a report that was critical of the company’s efforts to safeguard customer data.