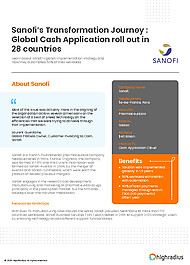 The existing cash application process at Sanofi was plagued by extreme differences in the process flow and structure all around the company; low uniformity led to disorganized work and confusion. With a presence across the globe, even though some of the branches they had did use automation, others were completely manual and did not have any form of automated solution in place for pulling remittances or invoice data from emails and portals.

A lack of clarity among teams into their goal setting and visibility into end to end processes also led to dumbing down of the workflow.

They also wanted to reduce their A/R overdue workload as it clogged up the entire cycle and also led to delays.

Learn about Sanofi’s global implementation strategy and how they automated 50% of their workload.

The opportunity beyond your doorstep
View

The Definitive Guide to Lead Nurturing