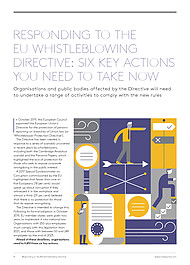 The Directive has been created in response to a series of scandals uncovered in recent years by whistleblowers, including both the Cambridge Analytica scandal and the Panama Papers. A 2017 Special Eurobarometer on Corruption highlighted that fewer than one-in-five Europeans (18 per cent) would speak up about corruption if they witnessed it in the workplace and almost a third (29 per cent) believed that there is no protection for those that do expose wrongdoing.

The Directive is intended to change this. Following its formal adoption in October 2019, EU member states were given two years to implement it into national law.  Organisations with 250-plus employees must comply with this legislation from 2021, and those with between 50 and 249 employees by the end of 2023. Ahead of these deadlines, organisations need to fulfil these six key actions.

The workplace just got smarter
View

Delivering the Workplace of the Future
View