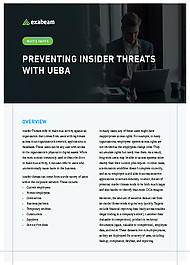 Insider threats refer to security risks caused by malicious users within a corporate network. This type of attack is different from one caused by a compromised credential, where an external hacker has used valid, stolen account credentials to impersonate an employee and access a network. In the case of a malicious insider, the user typically is acting with intent and likely knows that they are breaking policy and potentially the law.

Early detection is difficult because the signals that point to a malicious insider live in multiple places and require a level of expertise that few systems and no humans have.

Read the white paper and learn how to: