E-Signatures 2020: Use Cases and Opportunities – DK 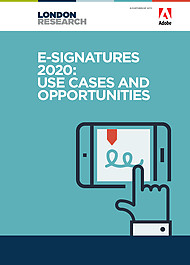 For a long time, signing a contract or an agreement has been an annoying physical intrusion into an increasingly digitised world.

It’s been the moment where online processes have had to stop and give way to offline action, causing delays and inefficiency, complicating storage, and making compliance harder to prove. It’s frustrating for customers and partners, and increasingly makes the business look old-fashioned and out-of-touch.

This research surveyed more than 1,500 businesses to find out how widely electronic signatures have been adopted, what they’re being used for and by whom. It examined the barriers to adoption and the challenges involved in implementation. And it looked at the perceived benefits of the technology and how these are being measured.