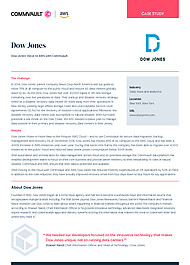 In 2014, Dow Jones' parent company News Corp North America laid out goals to move 75% of all compute to the public cloud and reduce 50 data centers globally down to six. Their disaster recovery strategy relied on a disaster recovery data center 30 miles away from their operations in New Jersey.

Dow Jones chose to move data to the Amazon AWS Cloud - and to use Commvault for secure data migration, backup, management and recovery. As of December 2016, Dow Jones has moved 58% of its compute to the AWS Cloud and has seen a 400% increase in AWS instances year-over-year. During that same time frame, the company has been able to migrate over 4,000 instances to the public cloud and reduced data center power consumption below 2005 levels.