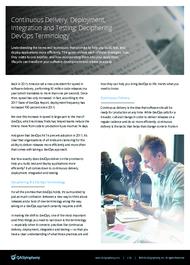 Understanding the terms and techniques that promise to help you build, test, and deploy applications more efficiently. This guide reviews each of these strategies, how they relate to one another, and how incorporating them into your application lifecycle can transform your software development and release practices.

Back in 2015, Amazon set a new precedent for speed in software delivery, performing 50 million code releases in a year (which translates to more than one per second). Since
then, speed has only increased. In fact, according to the 2017 State of DevOps Report, deployment frequency has increased 700 percent since 2015.

We owe this increase in speed in large part to the rise of DevOps, which McKinsey finds has helped teams reduce the time to move from code to production by as much as 74 days.

And given that DevOps hit 74 percent adoption in 2017, it’s clear that organizations of all kinds are clamoring for the ability to deliver releases more efficiently and more often that comes with taking a DevOps approach.

But how exactly does DevOps deliver on the promise to help you build, test and deploy applications more efficiently? It all comes down to continuous delivery, deployment, integration and testing.