BIOS Security – The Next Frontier for Endpoint Protection 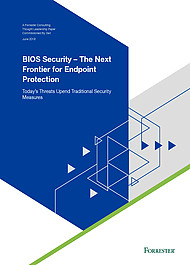 Everyone is familiar with the process of booting up a computer. Many of us do this every day — pressing the power button, hearing the startup sound, and seeing the home screen appear. But even some tech professionals may not be aware of what’s happening under the surface of their computers. When the CPU of any computer is booted, it communicates with an internal firmware chip called the BIOS (basic input/output system). This BIOS — a tiny hardware microchip hidden within the computer’s motherboard — acts as the gate to all the computer’s hardware and it gives the commands for how each piece of hardware is supposed to behave and interact.

The BIOS is considered one of the most valuable parts of a computing system because of its crucial role to the overall operating system. Without the BIOS firmware chip, your computer wouldn’t even be able to load its home screen. Something many of us take for granted.

All Clouds Are Not Equal