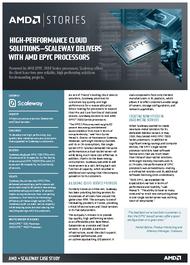 Scaleway, one of France’s leading cloud services providers were looking to expand their Pro and Core families of dedicated servers. Scaleway wanted to maintain its promise to its customers to continue to deliver high performing, top quality servers for a reasonable price.

By adopting the, EPYC CPUs, Scaleway delivered extraordinary performance yet consumed roughly 50 percent less energy. They delivered approximately 33% higher compute density than competing processors. Thanks to the energy efficiency of these single-socket CPUs, Scaleway could run each rack at capacity while keeping costs low and sharing the resulting savings with its customers.

AMD EPYC solutions to accelerate their customers workloads and allow them to deploy virtualized environments and virtual machines on their servers.

Top 5 Pitfalls to Avoid in Your Resiliency Strategy